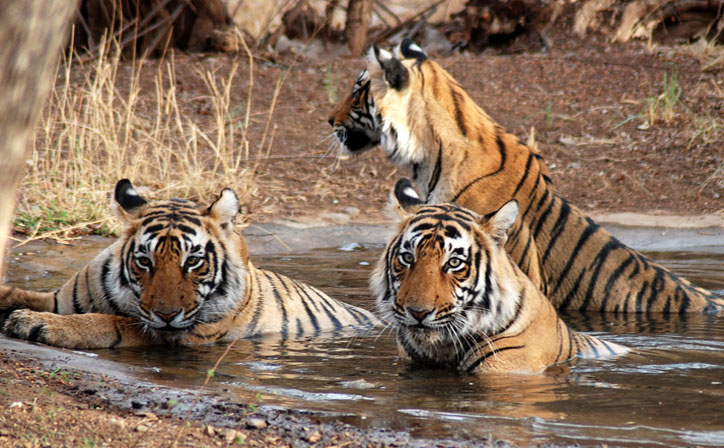 Day – 01 Arrival / Delhi
At the airport, you will see that Tree Trunk Travel representative is waiting to give a warm welcome and later he will escort you to your hotel, previously reserved. On the way to the hotel, you can enjoy the surroundings and watch the frenetic movement of people in New Delhi.
After upon arrival in Hotel discuss your tour itinerary with our representative in Lobby and after that our representative will help you to check into formalities.
Overnight at Hotel

Day – 02 Delhi:
Morning we will start our day to explore the Delhi. Delhi is the largest metropolis by area and the second – largest metropolis by population in India. Delhi is divided in two parts (like other city in India) – Old Delhi and New Delhi. We will start our tour from Old Delhi. A sight-seeing tour of Old Delhi would include visiting the Raj Ghat - the memorial site where Mahatma Gandhi was cremated; Jama Masjid - the largest mosque in India.
NEW DELHI - An extensive sight-seeing tour of New Delhi would include a visit to the Humayun's Tomb, the Qutub Minar, a drive along the ceremonial avenue - Rajpath, past the imposing India Gate, Parliament House, the President's Residence and would end with a drive through the Diplomatic Enclave.
Highlight of the Tour: The Highlight of the tour is the Rikshaw ride in Old Delhi. We will pass throught the Chandni Chowk by the Rikshaw. The rikshaw pullers here take you on a ride through various routes. The Rikshaw ride give you a chance to glance at the colourful street of the place. Chandni Chowk is very colourful & you will find the hustle and bustle market.
Evening come back to the Hotel for relax. You have option to go outside for the dinner.
Overnight at Hotel

Day – 03: Delhi / Agra
Morning drive to Agra. Meeting & assistance upon arrival at Hotel.
In this afternoon, we will visit the Agra Fort. For built in red sandstone with its magnificent palaces, halls of public and private audience and the beautiful gardens. This is where Emperor Shah Jahan was kept under house arrest by his third son Aurangzeb and spent the last year of his life viewing the Taj Mahal from across the river Jamuna.
Overnight at HotelGet Free Quote

Day – 04: Agra / Fatehpur Sikri / Ranthambore
Morning we will visit the Taj Mahal at sunrise. Taj Mahal is UNESCO World Heritage Site and one of the New Seven Wonders of the world, Taj Mahal enthralls visitors with its shimmering beauty. Standing proudly on the banks of River Yamuna, with the winding river at back and lush green, landscaped gardens in front, the Taj Mahal leaves one speechless with its ethereal beauty. At sunrise, when it is bathed in the pinkish glow of the rising sun, the Taj Mahal holds your gaze. It is also a great time to take some unforgettable pictures! Later transfer to Hotel for breakfast.
After the breakfast drive to Ranthambore enroute we will visit the Fatehpur Sikri. Fatehpur Sikri bears exceptional testimony to the Mughal civilization at the end of the 16th century. It offers a unique example of architectural ensembles of very high quality constructed between 1571 and 1585. Its form and layout strongly influenced the evolution of Indian town planning, notably at Shahjahanabad (Old Delhi).
Later continue drive to Ranthambore. Upon arrival check into Hotel.
Ranthambore park, which is one of the finest tiger reserves in the country, is one of the best places in the country to see the majestic predators in the wild. The forests around the Ranthambore Fort were once, the private hunting grounds of the Maharajas of Jaipur. The desire to preserve the game in these forests for sport was responsible for their conservation, and subsequent rescue by Project Tiger.
Ranthambore national park is famous for its Tigers and is favourite with photographers. Apart from that a large numbers of Sambhar, chital, Nilgai, Gazzelle, Boars, Mongoose, Indian Hare, Monitor Lizards & large number of birds.
Overnight at Hotel

Day – 05: Ranthambore
Enjoy two safaris today (one in the morning – pre breakfast and one in the afternoon post lunch) in the Ranthambore National Park.
Overnight at Hotel

Day – 06: Ranthambore / Jaipur
Enjoy morning game drives. Return to the hotel for breakfast, later drive to Jaipur.
Upon arrival check into hotel. Jaipur is one of the finest planned cities of India, located in the semi-desert lands of Rajasthan. The city which once had been the capital of the royalty now is the capital city of Rajasthan. The very structure of Jaipur resembles the taste of the Rajputs and the Royal families. At present, Jaipur is a major business centre with all requisites of a metropolitan city.
Rest of the day with at leisure to enjoy the local bazaars of Jaipur. Jaipur is also known as the shopper’s paradise. Jaipur is a city of vibrant colors and markets (bazaars) of Jaipur verify this fact. Jaipur's colorful markets offer a great break to stop and shop on you tour. Usually tourists include shopping and visiting the lively markets of Jaipur in their itinerary. While moving through the markets, you will come across the vivacious culture of this region. Jaipur is the perfect place to shop for Handicrafts, antiques, jewelry, gems, pottery, carpets, textiles, metalwork and leatherware
Overnight at Hotel Get Free Quote

Day – 07: Jaipur
Proceed for a morning excursion to Amber Fort. Elephant ride ascent to the fort.
AMBER FORT PALACE- Amber is the classic romantic Rajasthani fort palace. Its construction was started by Man Singh I in 1592, and completed by his descendent Jai Singh I. Its forbidding exterior belies an inner paradise where a beautiful fusion of Mughal and Hindu styles finds it's ultimate expression. Continue sight- seeing.
CITY PALACE- A delightful blend of Mughal and traditional Rajasthani architecture, the City Palace sprawls over one-seventh of the area in the walled city. It houses the Chandra Mahal, Shri Govind Dev Temple and the City Palace Museum.
JANTAR MANTAR- This is the largest and the best preserved of the five observatories built by Jai Singh II in different parts of the country. This observatory consisting of outsized astronomical instruments is still in use.
HAWA MAHAL- The ornamental facade of this "Palace of Winds" is a prominent landmark in Jaipur. Their five-storey structures of sandstone plastered pink encrusted with fine trelliswork and elaborate balconies. The palace has 953 niches and windows. Built in 1799 by Pratap Singh, the Mahal was a royal grandstand for the palace women. Afternoon drive to Delhi & transfer to airport to board the onward flight.
Sound & Light show at Amber fort:
In this evening we will visit the sound & light show at Amber fort. Amber was known in the medieval period as Dhundar (meaning attributed to a sacrificial mount in the western frontiers) and ruled by the Kachwahas from the 11th century onwards – between 1037 and 1727 AD, till the capital was moved from Amer to Jaipur. The history of Amer is indelibly linked to these rulers as they founded their empire at Amer.
Amber holds the history of a citadel, pulsating with a legendry past of 600 years and 28 kings of the Kachhwaha dynasty, before their capital moved to Jaipur. Through their unique diplomacy of strategic alliances, their valor and strength, the rulers not only established a long dynasty but, in time, also played a part in changing the destiny of medieval India.
Overnight at Hotel

Day – 08: Jaipur / Delhi
Delhi / Departure
Morning drive to Delhi. Upon arrival in Delhi transfer to the airport to board the onward flight.Get Free Quote