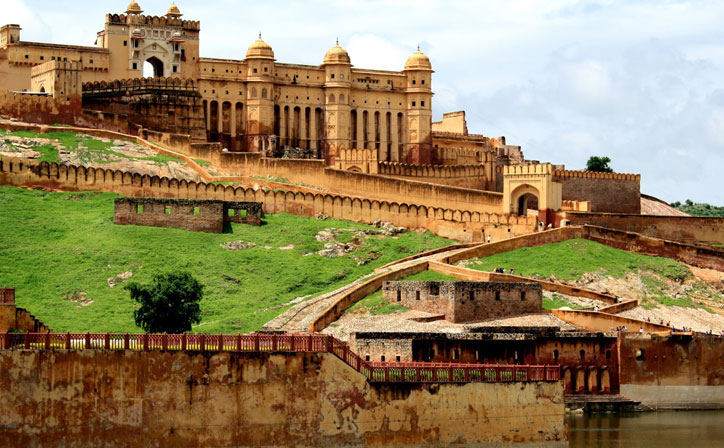 Day 01: Arrival / Delhi
At the airport, you will see that Tree Trunk Travel representative is waiting to give a warm welcome and later he will escort you to your hotel, previously reserved. On the way to the hotel, you can enjoy the surroundings and watch the frenetic movement of people in New Delhi.
After upon arrival in Hotel discuss your tour itinerary with our representative in Lobby and after that our representative will help you to check into formalities.
Overnight at Hotel

Day 02 Delhi:
Morning we will start our day to explore the Delhi. Delhi is the largest metropolis by area and the second – largest metropolis by population in India. Delhi is divided in two parts (like other city in India) – Old Delhi and New Delhi. We will start our tour from Old Delhi. A sight-seeing tour of Old Delhi would include visiting the Raj Ghat - the memorial site where Mahatma Gandhi was cremated; Jama Masjid - the largest mosque in India.
NEW DELHI - An extensive sight-seeing tour of New Delhi would include a visit to the Humayun's Tomb, the Qutub Minar, a drive along the ceremonial avenue - Rajpath, past the imposing India Gate, Parliament House, the President's Residence and would end with a drive through the Diplomatic Enclave.
Highlight of the Tour: The Highlight of the tour is the Rikshaw ride in Old Delhi. We will pass throught the Chandni Chowk by the Rikshaw. The rikshaw pullers here take you on a ride through various routes. The Rikshaw ride give you a chance to glance at the colourful street of the place. Chandni Chowk is very colourful & you will find the hustle and bustle market..
Overnight at Hotel

Day 03: Delhi / Udaipur (SG 2437 – 1120 / 1235 Hrs)
Morning transfer to airport to board the flight to Udaipur. Meeting & assistance upon arrival in Udaipur. Udaipur was named Best City of the World in 2009 by Travel + Leisure. Udaipur is also known as the "Venice of the East", and the Kashmir of Rajasthan. It is claimed that Jag Mandir of Udaipur was the inspiration behind Shahjahan's creation of the Taj Mahal.
Highlight of the tour: The highlight of the Udaipur is boat ride at Lake Pichola. Evening enjoy boat cruise on Lake Pichola - the shimmering waters of the Lake combined with the City Palace in the background, serve as a magical way to end your day in Udaipur.
Overnight at Hotel

Day 04: Udaipur
After breakfast, you will be picked up from your hotel and taken for a guided sightseeing tour of Udaipur. We will start the tour to visit The City Palace – is the largest palace complex in Rajasthan. The main part of the palace is now preserved as a museum with a large and varied collection of glass, porcelain figures and miniature paintings. Following the tour we will visit the Jagdish Temple. It is located only 150 mts from the city palace is the famous Jagdish Temple. This fine Indo-Aryan Temple was built by Maharana Jagat Singh in 1651 and enshrines a black stone image of Lord Vishnu as Jagannath, Lord of the universe. A brass image of the Garuda is in a shrine in front of the temple.
Later visit the Saheliyon ki bari or the garden of the Maids of Honour, is in the north of the city. It is a small ornamental garden with fountains, stone elephants and a delightful lotus pool.
Overnight stay hotelGet Free Quote

Day 05: Udaipur - Rohetgarh
Morning we will drive to Rohetgarh. Rohet is a quaint place that is found in the south of Jodhpur settled by the Bishnoi community. It has a major centre of attraction is a 375 year old fortified desert home which stands on the banks of a small lake teeming with birdlife. The refined family still resides in the Rohet Garh, renovated in the traditional Rajput style. Traveling within this city is quite interesting through jeep, camel or horse safaris into the desert and Bishnoi tribal areas.
Overnight stay hotel

Day 06: Rohet -Jaisalmer
Morning we will enjoy the Jeep safari in tribal village. Rohet Safari's - Pioneered by us seventeen years ago, this program still remains our main highlight. Showcasing the best of the land, it is a complete cultural experience, which encompasses all that this region has to offer. From the warm and hospitable people, to the various customs and ceremonies and the abundant wildlife, guests have the rare privilege of being welcomed into people's homes and interacting with them. They get to experience and understand a way of life that takes them closer to their roots.
They meet the 'Premier ecologists of the world', the Bishnois, who have protected nature for more than 500 years and are responsible for the very survival of species like the Black Buck antelope (India's most beautiful antelope and a rare and protected species today). They share a beautiful relationship with this special animal, wherein the antelope stays close to Bishnoi habitation, never leaving it, and displays complete trust in the Bishnoi people. Guests also meet the Raikas (shepherds) with their glorious costumes, and the Paliwals and Meghwals, the Brahmin farmers and weavers respectively. Later come back to Hotel for breakfast.
After the breakfast drive to Jaisalmer. Upon arrival check into Hotel.
Rising from the Thar Desert like a golden mirage is the city of Jaisalmer. The Jaiselmer fort etched in yellow sandstone stands with its entire awesome splendor. The life within the citadel conjures up images of medieval majesty visible in its narrow lanes strewn with magnificent palaces, havelies, temples and typical desert life of men women cattle and camels. The 80 meter high fort, perch on the hill, houses the entire township within its ramparts. It has enchanting narrow lanes dotted with exquisite havelis, beautifully sculptured Jain temples of the 12th-15th century and palaces. The fort is approached through four gateways -Akhaiya Pol, Ganesh Pol, Suraj Pol and Hava Pol. Some of the most exotic mansions or havelis, all intricately latticed, are strewn all over Jaisalmer each with a different facade.
Overnight at hotel

Day 07: Jaisalmer – Sam- Jaisalmer
In morning, after breakfast you will proceed for full day sightseeing tour of The Golden City - Jaisalmer. It is in the heart of the Great Indian Desert. Its temple, fort and palaces are all built of yellow stone. See the Patwon-Ki-Havelies, Salim-Singh-Ki -Haveli and Gandhi Sagar Tank. Also visit Barabagh Hill.
After noon drive to sam sand dune village to enjoy the Camel ride on Great Indian Thar Desert.
Later come back to Hotel.
Overnight at hotel

Day 08: Jaislamer- Jodhpur
Morning drive to Jodhpur. Upon arrival check into Hotel.
Jodhpur is an historic city and the origin dates to the year 1459 AD when it was founded by Rao Jodha, the Rajput chieftan of the Rathores. The Rathore kingdom was also known as the Marwar and was the largest in Rajputana. Jodhpur is also known as the blue city, an apt name as most houses in the old city are shades of blue.
Overnight at hotelGet Free Quote

Day 09: Jodhpur -Jaipur
After the breakfast, we will start the tour of Jodhpur. We will visit the Mehrangarh Fort - Perched on a high hill, it takes five kilometres by a winding road to reach Mehrangarh - considered by many as the most impressive f ort in the fort-studded Rajasthan. Originally built by Maharaja Jodha Rao, the fort was added to by successive rulers of Marwar. Of the seven massive gates to the fort, a few like Jayapol and Fatehpol were commemorative structures built to celebrate the Marwar rulers' victories over various enemies. Inside the fort is a series of courtyards and palaces. Entered through Surajpol, the Jodhpur Museum houses an excellent collection of artefacts of Rajasthan. Following the tour visit to Jaswant Thada. While in Jodhpur, remember to visit this white marble cenotaph of Maharaja Jaswant Singh II.
An interesting walk around the colourful Sadar market and the Clock Tower is the best way of exploring the heart of the city. You could also sample the culinary delights of Jodhpur apart from visiting the famous antique shops of Jodhpur.
Following the tour of Jodhpur drive to Jaipur en route visit the countryside area.
Overnight at hotel

Day 10: Jaipur
Proceed for a morning excursion to Amber Fort. Elephant ride ascent to the fort.
AMBER FORT PALACE- Amber is the classic romantic Rajasthani fort palace. Its construction was started by Man Singh I in 1592, and completed by his descendent Jai Singh I. Its forbidding exterior belies an inner paradise where a beautiful fusion of Mughal and Hindu styles finds it's ultimate expression. Continue sight- seeing.
CITY PALACE- A delightful blend of Mughal and traditional Rajasthani architecture, the City Palace sprawls over one-seventh of the area in the walled city. It houses the Chandra Mahal, Shri Govind Dev Temple and the City Palace Museum.
JANTAR MANTAR- This is the largest and the best preserved of the five observatories built by Jai Singh II in different parts of the country. This observatory consisting of outsized astronomical instruments is still in use.
HAWA MAHAL- The ornamental facade of this "Palace of Winds" is a prominent landmark in Jaipur. Their five-storey structures of sandstone plastered pink encrusted with fine trelliswork and elaborate balconies. The palace has 953 niches and windows. Built in 1799 by Pratap Singh, the Mahal was a royal grandstand for the palace women.
Overnight at hotel

Day 11: Jaipur- Fatehpur Sikri- Agra
After the breakfast we will drive to Agra en route we will visit the Fatehpur Sikri. Fatehpur Sikri bears exceptional testimony to the Mughal civilization at the end of the 16th century. It offers a unique example of architectural ensembles of very high quality constructed between 1571 and 1585. Its form and layout strongly influenced the evolution of Indian town planning, notably at Shahjahanabad (Old Delhi).
Later continue drive to Agra. Upon arrival check into the Hotel.
Overnight at Hotel

Day 12: Agra - Delhi
Morning we will visit the Taj Mahal at sunrise. Taj Mahal is UNESCO World Heritage Site and one of the New Seven Wonders of the world, Taj Mahal enthrals visitors with its shimmering beauty. Standing proudly on the banks of River Yamuna, with the winding river at back and lush green, landscaped gardens in front, the Taj Mahal leaves one speechless with its ethereal beauty. At sunrise, when it is bathed in the pinkish glow of the rising sun, the Taj Mahal holds your gaze. It is also a great time to take some unforgettable pictures! Later transfer to Hotel for breakfast.
After breakfast, we will visit the Agra Fort. For built in red sandstone with its magnificent palaces, halls of public and private audience and the beautiful gardens. This is where Emperor Shah Jahan was kept under house arrest by his third son Aurangzeb and spent the last year of his life viewing the Taj Mahal from across the river Yamuna. Following the tour drive to Delhi.
Upon arrival in Delhi check into Hotel.
Overnight at Delhi Hotel.

Day 13: Delhi -Departure
Morning transfer to the airport to board the Onward flight Get Free Quote