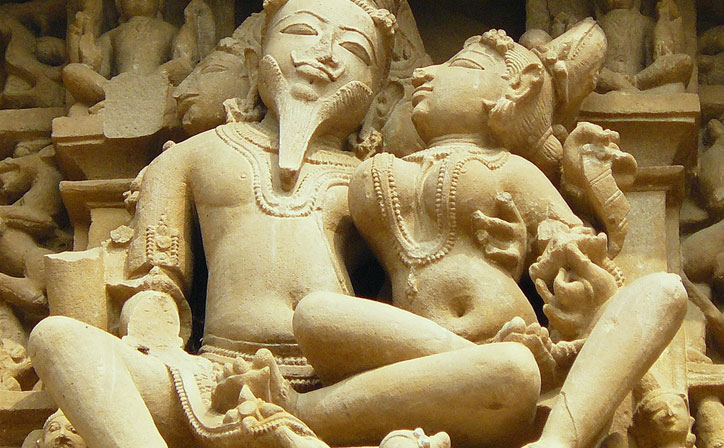 Khajuraho in central India is Kamasutra alive on the rocks

Khajuraho symbolizes the eternal heritage of India and these monuments in the Central India are categorized among the world class heritage destinations. Also called as the temples of love making, these heritage complexes have unique sculptures that show the various poses of love making. Designated as the UNESCO world heritage sites, Khajuraho temples symbolize the stone version of Kamasutra and the love making poses come alive on the stone. This is the uniqueness of these temples. The discovery of these monuments in India is a tribute to the world. As per the historical facts, these temples were constructed by the Chandela Rajputs considered to be the direct descendents of moon god. The sculptures in Khajuraho are erotic and as per the recorded dates, these temples were built over a span of 200 years from 950 AD onwards. There is another theory behind the construction of these temples. It is said that the people were involved in meditation those days and they had lost interest in love making with their wives. The king was greatly disturbed by this because the population was decreasing. This also could be one of the reasons for the construction of these temples. The honeymooners love to visit these temples to get the ignition for love making. This heritage site attracts lot of foreign from the various countries of the world.